To Elevate The Course Of Discussion

UPDATE: Linked back to Smitty. Not sure yet of what I won, short of bragging rights. I did enjoy the Anderson and Roe clip he provided. However, this would have been my choice for the clip, IMHO.

Robert Stacy has declared that this is International Rule 5 BikiniFest Week. But is it way to get hits from the lowest common denominator or a clever ploy to offend feminists? Only he knows for sure and he hasn't mentioned anything to me about it.

I had a question of conscience before my submission. Is it right that he should be the one to hoard all of the attention regarding babes in bikinis? He is providing round ups for other sites to help share in the wealth of page hits. Let it be said he is never stingy with the linkage. And is it right for me to get in on the act as well? I only do this part time. Champagne is popped when I have a hundred hits in a 24 hour period. But do I cheapen the course of political dialog done on this blog (heh) by the bikini pictures? Do I get hits because of the quality (heheh) of posts or the quantity of girls? I usually get plenty of the latter but do people stick around for the former (heheheh)?

Or is it exploitative of the young women by re-publishing the photos? Or worse yet, empowering some lecherous old man who soon might meet Chris Hanson for some cookies and lemonade?

On the other hand, there really is no end of models, former models, actresses, celebrities, has-been celebrities, reality TV stars, athletes, and Paris Hilton pictures out there. I'm not really hurting anything by re-posting something that most everyone has already seen. And it would be a shame to let all those hits go by the wayside.

I'm not saying that I should ignore my conscience in favor of my Sitemeter. But instead of the usual of vapid blond pinups (NTTIAWWT), I would like to submit Vanessa-Mae. 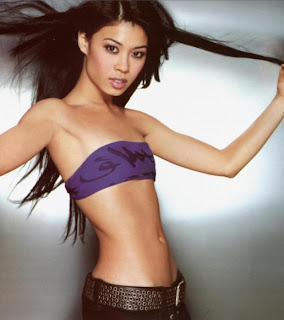 So it's not exactly a bikini picture but why quibble? She can tickle the strings too.


After all, Stacy needed some culture and international spice injected into the mix.

Found the performance clip over at Sondrak's place.
Share |
Posted by Dave C at 12:26 PM