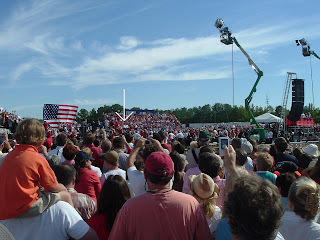 This was the first time since I was a little kid seeing Ronald Reagan speak that I was able to go see a Presidential Rally like this. I did miss the email asking everyone to wear red, so my blue shirt stood out. Thankfully, I wasn't the only one not wearing red either.

If you look close, you can see Sarah Palin in this photo. 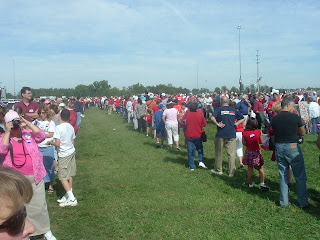 Due to the sheer numbers of people wanting to attend, it was moved to Richmond International Speedway. The news estimated that roughly 25000 people showed up to the event. I think it was more. 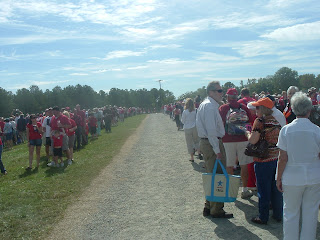 Some audio difficulties started to plague the event. Either mics stopped working or a democrat was running the sound board right before Sarah and Hank Williams Jr. turn to speak. People towards the back of the oversized crowd couldn't hear well and started to ask for more volume. It's understandable on how Sarah could have thought it was protesters. Sarah Palin gave a good speech that fired up the crowds. Even though I was way in the back, I did see her wink at me. 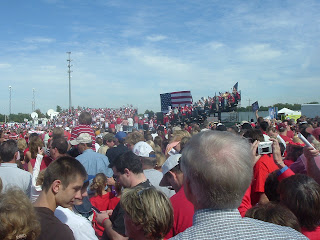 A few people spoke before Sarah, including Jim Gilmore. Gilmore is the GOP candidate running for the US Senate seat that Jim Warner is giving up. Mark Warner is the Democrat running for the same spot.
Share |
Posted by Dave C at 8:47 AM