The consensus is in, there is no arguing with it. The science is settled as Al Gore is fond of saying.

Brought to you by the home office in Frankenmuth, Michigan.

Last Christmas, she broke George Micheal's heart so this Christmas he is giving it to someone special. Someone special apparently is whoever it is that shuffles his feet in the bathroom stall next to him.

Number Four: Grandma Got Ran Over By A Reindeer.

It's just silly, sad and-- after the second time-- annoying as Rosie O'Donnell, Roseanne Barr and Joy Behar merged into one horrific creature who became your mother-in-law.

It sounds exactly like it was made. On a home studio in 1979.

Nothing wrong with home studios today. With a good computer and sound mixer, a person can make a CD quality song or two.

It's not like McCartney couldn't afford to bring this into a real studio and polish it up. The problem is that he didn't and-- being how no one can say "No" to a former Beatle-- we are stuck with this.

Number Two: Happy Xmas (War Is Over) by John Lennon and Some Shrieking Succubus.

Because there is nothing worse than a celebrity preaching.

The melody is alright, it's the lyrics that gave this song the number two spot.

And the number one worst Christmas Song is: Do They Know It's Christmas by Band Aid (various artists, AKA, whoever was free at the time and needed a boost in their career or wanted to satisfy the Public Service Announcement condition of their parole).

Because if there is one thing worse than one celebrity preaching it's a chorus of celebrities preaching.

Honorable mention is Faith Hill with Where Are You Christmas. I didn't want to make a top six and a top ten would have been too many videos for one post. Besides, it will leave me open to put 'The Grinch' in the Top Five Worst Christmas movies for next year.
Share |
Posted by Dave C at 10:56 PM

Video: Trailer For The Hobbit

An Unexpected Journey. Coming to theaters in December. Of 2012.

I think most people should look up who exactly the dwarfs are before checking out the the movie. There are 13 of them, it would help to track of who is who.
Share |
Posted by Dave C at 2:21 AM

Three Weeks Behind A Starbucks Counter

If Aimee Groth wanted to know what working at a Starbucks was like, she should have sat down inside of one and watched what exactly they all did. "Leisurely" isn't one of their normal job descriptions.

It's safe to assume she won't be falling back on her experience in the service industry for a 'Plan B'.

I had recently moved to New York City, and I was freelancing at the time. But I had to get a part-time job in order to pay next month’s rent. So one afternoon, I printed off a stack of resumes,and hand-delivered them to nearly 30 Starbucks in Lower Manhattan and one in Brooklyn.

Only one manager called me back: the one from Brooklyn, just a few blocks from my apartment — and the last store I visited. She offered me the job at $10/hour; and if I worked part-time for three months, I'd be eligible for health insurance.

I'd later find out that the store is located next to the busiest transit hub in Brooklyn, which makes it the busiest Starbucks outside of Manhattan. My initial idea of working a leisurely part-time job was completely false. This was going to be hard work. And a lot of it.[Bold mine]

Unearthed: The First Draft Of Steven Bloom's "What's The Matter With Kansas Iowa"

His final and slightly more polished piece is posted at The Atlantic or you can check out what he really thought from his first draft, uncovered by Iowa's own, umm, Iowahawk.

But seriously, save yourself the trouble of the published piece and go read his first draft:

On Iowa's western frontier lies the Missouri River, which girds a huge, sparsely populated agricultural region anchored by Sioux City (pop: 83,000) in the state's far northwest and Council Bluffs (pop: 62,230), across from the Nebraska hub of Omaha. Eskimo Pies, the original I-Scream Bar, was invented by a Danish immigrant in Onawa, a tiny town not far from the Missouri, and today you can visit an Eskimo Pie display at the Monona County Historical Museum there.

This concludes our break into folksy quaintness. Now it is time to resume our deep journalism dive into the psychic chasm of this rustic hell on earth.

In between the two great, garbage-clogged rivers, Iowa is a place of bizarre contrasts. The state is split politically: to the east of Des Moines, Iowa is solidly Democratic; to the west, it's rabidly Republican. Bizarre enough for you? Well. hold on to your hat because Iowa's two U.S. Senators are emblematic of this progressively solid vs.rabies-infested-evil Jeckyl-and-Hyde schizophrenia: Fundamentalist Republican Charles Grassley and Ultra-liberal Democrat Tom Harkin. Grassley is a decrepit 78; Harkin is a youthful 72. How's that for top-notch journalistic contrast?

Airport Security In The Very Best Of Hands

[O]n a flight from Virginia to Florida, Vanessa Gibbs found herself detained by the Transportation Security Administration (TSA) over the appearance of her purse.

And just to be clear, it wasn't the content inside the purse that the TSA objected to. No, agency officials took exception with the design of a gun on Gibbs' handbag.

To be clear, this was on the return portion of her round trip. She made the first part of her trip without incident with the same purse. 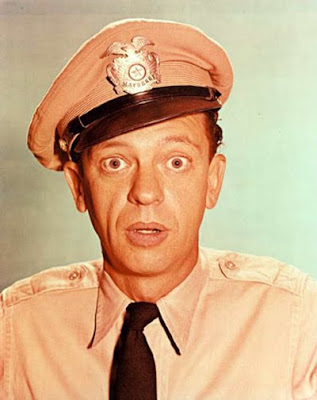 Graphic Artist's rendition of what the TSA officer may of looked like.
Thanks to Greg for the find and the Barney Fife suggestion.
Share |
Posted by Dave C at 10:32 AM

Or for the even more obscure: Mates of State with Parachutes (Funeral Song).

From The Daley Gator.

Via Darleen at Protein Wisdom.


More John Carter Videos
I'm in agreement with her, this could go either way, good or bad.

Hopefully with Andrew Stanton-- of Finding Nemo and Wall-E fame-- at the helm it should help.
Share |
Posted by Dave C at 1:25 AM

Republican Attorney General Ken Cuccinelli will be announcing his bid for Virginia Governor in the coming days, possibly as soon as the RPV Advance this weekend.

One more reason why the blogosphere trumps the MSM.

On Thursday, Dec. 1, the city's de facto ban of the Happy Meal commences. San Francisco has accomplished what the Hamburglar could not. Or has it?

In order to include a toy with a meal, restaurants must now comply with city-generated nutritional standards. Those are standards that even the "healthier" Happy Meals McDonald's introduced earlier this year don't come close to meeting.
[. . .]
It turns out San Francisco has not entirely vanquished the Happy Meal as we know it. Come Dec. 1, you can still buy the Happy Meal. But it doesn't come with a toy. For that, you'll have to pay an extra 10 cents.

Huh. That hardly seems to have solved the problem (though adults and children purchasing unhealthy food can at least take solace that the 10 cents is going to Ronald McDonald House charities).

Read the rest to see the obvious elephant in the room. Nothing is said about the parent's responsibility to say, "No" to their kids.

So that leaves only the city to look out for the kids who can't help but eat only at McDonalds. And if McDonalds is able to skirt the law and still offer a Happy Meal then there is only one thing (via Hot Air) to take left to do
Share |
Posted by Dave C at 12:24 AM