Video: 'Zo And The Meaning Of Greed

He fell victim to one of the classic blunders - The most famous of which is "never get involved in a land war in Asia" - but only slightly less well-known is this: "Never 'Punk'd' an Egyptian actor by saying he is on Israeli TV"

Notice the high level of tolerance and respect that's being shown.

I do have to admit that if it was Ashton Kutcher that was slapped and pushed around, it would have made it the best Punk'd show of all.

More background about this here.
Share |
Posted by Dave C at 12:32 AM

If You See Only One Movie Sequel This Year. . .

Well, chances are it's going to be 'The Dark Knight Rises'.

But if you want to see two movie sequels this year, keep your calender open on 10/12/12 when 'Atlas Shrugged Part II' hits theaters.

"When The Backbone Of A Country Starts Thinking That Laws And Rules Are Not Worth Following, It's Just A Hop, Skip And A Jump To Anarchy"

This isn't so much of a matter of if but when in our country.

TV has given us the illusion that anarchy is people rioting in the streets, smashing car windows and looting every store in sight. But there’s also the polite, quiet, far deadlier anarchy of the core citizenry—the upright citizenry—throwing in the towel and deciding it’s just not worth it anymore.

If a big enough proportion of the populace—not even a majority, just a largish chunk—decides that it’s just not worth following the rules anymore, then that society’s days are numbered: Not even a police-state with an armed Marine at every corner with Shoot-to-Kill orders can stop such middle-class anarchy.

Brian and Ilsa are such anarchists—grey-haired, well-dressed, golf-loving, well-to-do, exceedingly polite anarchists: But anarchists nevertheless. They are not important, or powerful, or influential: They are average—that’s why they’re so deadly: Their numbers are millions. And they are slowly, painfully coming to the conclusion that it’s just not worth it anymore.


Be sure to read the whole thing.

Via Insty who has some thoughts of his own.
Share |
Posted by Dave C at 12:54 AM

If Move On Organizes A Protest Against Mitt Romney And No One Show Up, Does It Still Happen?

Sometimes I get emails.

News broke this morning in The Boston Globe that Mitt Romney may have been in charge of Bain Capital for three years longer than he'd previously reported—a bombshell that could change the trajectory of the presidential race.1 The press is all over the story, and people everywhere are wondering what Mitt is hiding by not releasing his tax returns from this period.

When George Romney, Mitt's father, ran for president in 1967, he released 12 years of tax returns. He said, "one year could be a fluke, perhaps done for show."

But that's all Mitt has released, one year. He willingly provided 23 years of tax returns to the McCain campaign in 2008 before being rejected for the vice presidential slot. Now he wants to be president—but he's unwilling to release the same information to the American people.

Why? That's the question—and the only way we'll find out is if Romney releases his returns.

That's why MoveOn members are showing up at Romney campaign offices all over the country on Friday to turn the heat way up and deliver a simple message: Release your returns now!

There's a Romney office in Chester [Virginia]. Can you stop by TOMORROW at NOON to drop off our "Release Your Returns" letter to make sure they, and the media, get the message?

That was Thursday.  I checked my calender, it was clear save for taking my daughters to the park to play.  Sure, I can swing by to see who will show up.

I arrived on scene at the campaign office about 12:30.  I figured I should give them some time get arrive and get organized.

Where the office is at is a pretty modern office park with ample parking and a few posh restaurants with some apartments  nearby.  The idea behind it all is to work, eat and play all within a few hundred yards of where you live. It's nice.

I wasn't sure on the exact location of the campaign office so I started to look for a group of people carrying around the same mass produced sign.  No luck.

It was a beautiful day out.  Not too hot in the mid eighties range.  So the weather shouldn't have been an issue for these true believers.

I double checked the address on my phone and found the place. 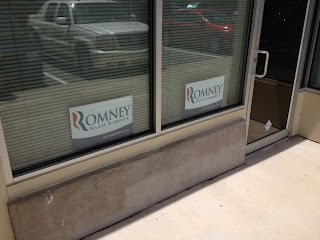 It really wasn't that difficult to find.

There wasn't anyone is sight.  To one side of the building. 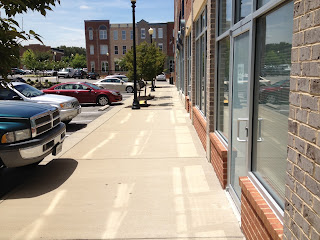 Or to the other side. 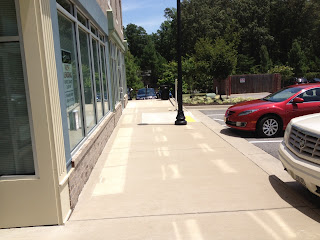 I don't know if it was because it was Friday the 13th or that it was the second Friday of the month and the welfare Living Assistance checks came in the mail that day or what was the reason. There wasn't anyone from Move On there.

I went inside and talked to Matt (I apologize if I got his name wrong, I didn't write it down at the time) and he told me that no one from Move On has showed up to picket.

I didn't wait too long as I had my kids with me and they were anxious to get to the park and why wait on nothing?

As I left the office complex, I checked to see if there were any protesters out near the busy street, trying to catch eyeballs as people drove by.  Nope.  Nothing there either.

I don't know how the others went but the protest in Chester, Virginia was a bust.

I did pick up a Romney bumper sticker so there's that.

California Keeps Whistling Past The Graveyard

San Bernardino joins the ranks of Stockton and Mammoth Lakes in filing for bankruptcy.

San Bernardino on Tuesday became the third California city in less than a month to seek bankruptcy protection, with officials saying the financial situation had become so dire that it could not cover payroll through the summer.

The unexpected vote came at the suggestion of the interim city manager, who said the city faces a $46-million deficit and depleted coffers.


Six paragraphs into the story, you get to the reason why:

The city's fiscal crisis has been years in the making, compounded by the nation's crushing recession and exacerbated by escalating pension costs, lucrative labor agreements, Sacramento's raid on redevelopment funds and a city reserve that is tapped out, officials said.

Miller told the council that the city faced major deficits for the next five years.

The deficits remain even after the city negotiated $10 million in concessions from employees and slashed the workforce 20% over the last four years.

So having unfunded liabilities tied to lifelong pensions, catering to every public union demand and having a state government playing shell games with state finances drained whatever reserve the city had.

San Bernardino's tax revenues have declined by as much as $16 million annually over the last few years, primarily because of drops in sales and property taxes.


The end result of having progressive policies in place means people end up voting with their feet and leaving the state.

Be sure to read the rest to find out about Stockton and Mammoth Lakes.
Share |
Posted by Dave C at 11:57 AM

Where your alarm clock is a three hundred pound guy who wakes you up to let you know the grass needs to be cut.

Columbia County sheriff’s investigators completed an investigation Friday into a July 2 incident in which Erica Masters claimed that Jimmy Vowell came into her home uninvited.

Walked into her home without permission.  And it was caught on tape.  He was fired soon after and rightfully so.

The guy is lucky he's wasn't plugged a few times.  Seriously, the man was humongous.  And for a single woman to wake up with him in her room.  Again.  Lucky.

"Officer, I woke up with this huge man in my room and I was afraid for my life."

Give some people an inch of authority and they take a mile.
Share |
Posted by Dave C at 2:12 AM