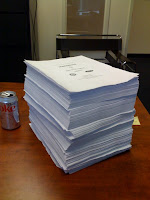 This is the United Auto Worker's contract with Ford. There might be a page or two difference between GM and Chrysler. Not too much in there on how to make a better car to compete with imports.

I’ll tell you this much, those 2,215 pages don’t include much regarding efficiency and competitiveness. What you’ll find are hundreds of rules, regulations, and letters of understanding that have hamstrung the auto companies for years.

This is why the Big Three are sucking wind when the UAW labor contracts are sucking the life out of the Big Three. Any pontential 'bail out' from the federal government will be going on to pay off the unions. Even when the bill was voted down in Congress on the Senate side, the White House may still set aside a chunk of change for the automakers. Which will be passed on to the Union workers. If GM, for instance, would be forced into Ch. 11, one thing they can do is to cancel a 22 pound labor contract and have 'Right to Work' instead to get by. Even catch up with Toyota in terms of profit.