Fear and Self-Loathing In Washington D.C.

UPDATE: Linked by McCain himself. I'm still hoping for traffic from people wanting 9/12 pictures but if Hannah Giles Bikini Photos work too, so be it.

I-95 stretched out in front of me on my way to Washington DC. I was hitting a cup of Mountain Dew with another cup of coffee in reserve. A sack with food from Taco Bell was sitting next to me. I haven't scrapped the bottom yet. The package of No-Doze wasn't touched yet.

I was lucky enough to find a parking garage within a couple of block from the Capitol building. At ten bucks for all day parking, it's a steal. 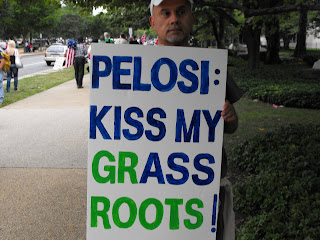 There was still a respectable crowd in the afternoon. If I was a foreigner and had to guess, I would say that the flag for the country was yellow and had a rattlesnake on it. A very nice couple were flying both, the Gadsden flag and the Arizona state flag. They had flown in on Wednesday for the purpose of going to the protest. 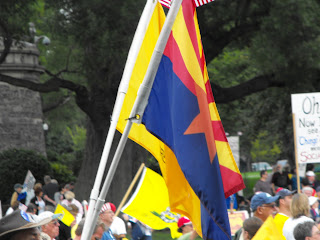 While I was looking for a certain blogger with a notorious reputation, I did notice that there was a air of hostility from the crowds. Not to each other but to Congress and the President. As if the people there didn't want the Government to choose their health care plan. And were making their voice heard. 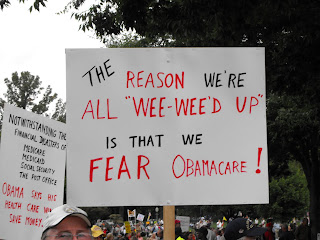 Despite what was said, not everyone was an angry white man. 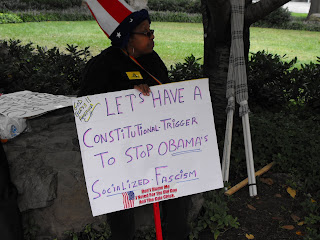 And I did see some people in white robes too. But they were definitely not with the 9/12 project. 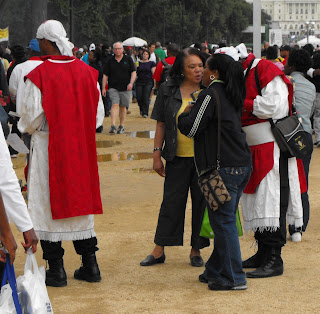 I finally located where McCain was staying at and start to hike my way there. I was stopped by a homeless man wearing glasses with no lenses. Nice enough guy but was soon asking me if I was at any of those protests earlier. Soon, the conversation turned to Barack Obama and a plea for money. I had a pocketful of loose change. I handed that to him. No idea how much it was but it was enough for him to stop talking. Worth every penny.

I meet Robert Stacy McCain outside of the hotel, having a smoke break with Dan Riehl. As soon as they were done with their butts, we headed up to the bar. Stacy is a 'Social Conservative' after all. Until it's time to pay the tab. Suddenly he remembers a 'Blog Posting' that needs to be done 'Right Away' and he's gone. At least I knew enough to write Matt Welch from Reason Magazine on the tab. 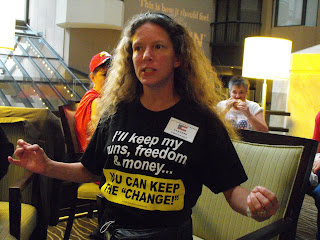 It was time for me to make my leave. It was a very long day, walking all over DC and still a longer drive home which can take a toll on a man. Luckily, I still had the No-Doze.
Share |
Posted by Dave C at 9:39 AM