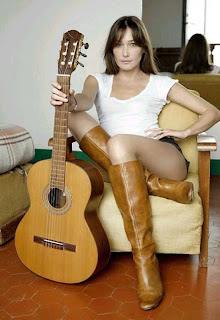 . . . That at the world stage, there is a First Lady that's pretty, toned, and talented. Carla Bruni recently married Nicolas Sarkozy early last year, making her the First Lady of France.

I knew she was a former model and that was about it when she started dating Sarkozy. Then a friend of mine showed me a video of her playing the guitar and singing. She's more than just a pretty face. And when I found that photo of her a while back I thought that the guitar was only a prop.

For those who really need to know, you can find the lyrics translated into English here. Go at your own disgression. The site is obviously safe for work or home or even church. And it's nothing against the song in and of itself. For me, knowing the lyrics now take away from the magic of hearing the song in it's original language.


She even has her own IMDB entry with more than the average First Lady. The usual entry has stock footage of newsreels and the occasional documentary of their husband and appearances on Morning Shows. Not Ms. Bruni.